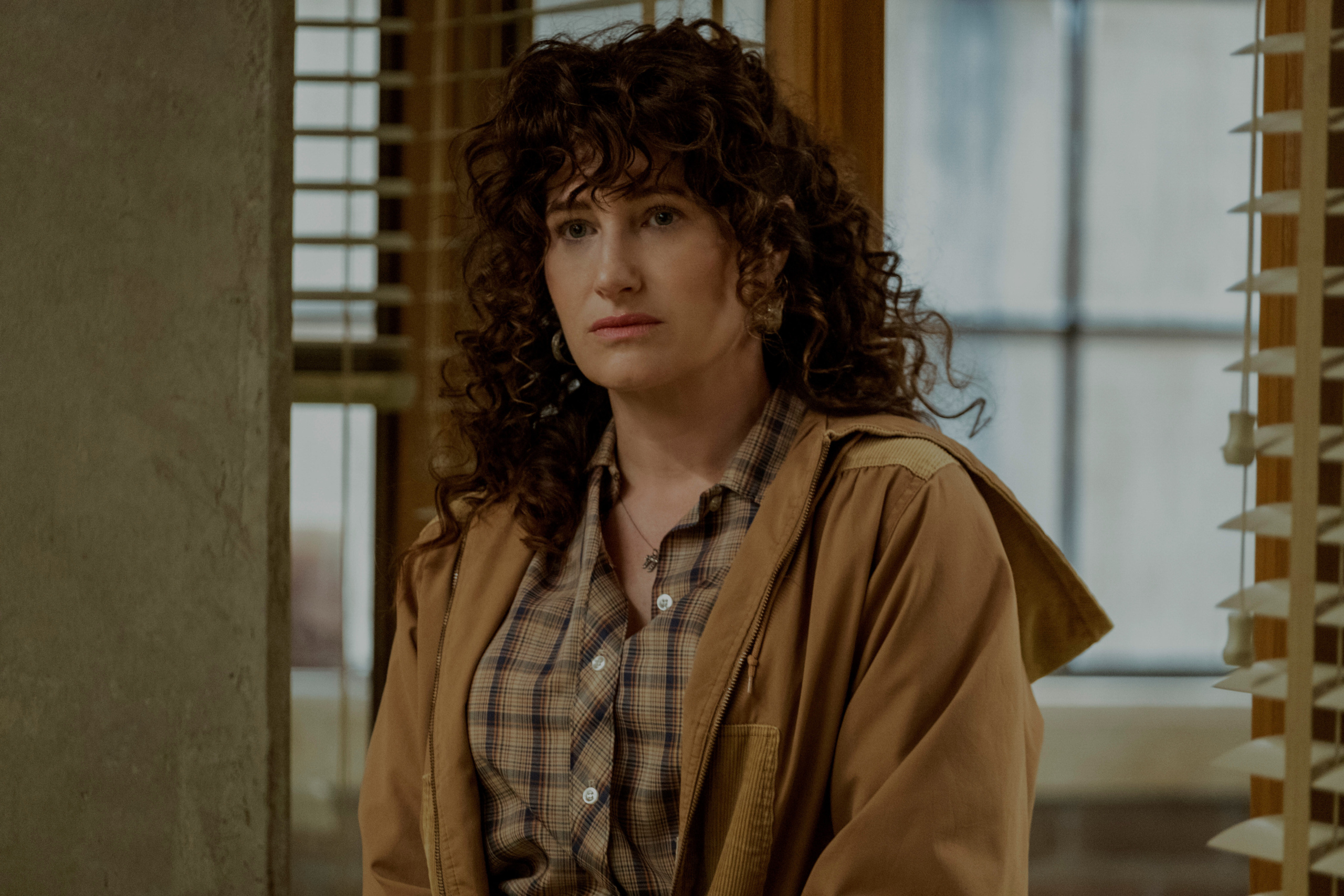 One of the first images of “The Shrink Next Door,” the limited series premiering Friday on Apple TV+, is of a smiling man wearing a huge kippah, chatting at a party in the Hamptons.

The party, viewers will later find out, is being held at the summer home of Marty Markowitz, a garment district merchant whose life becomes increasingly dominated by his psychiatrist, Isaac “Ike” Herschkopf. The series is based on a true story that was first told in a popular 2019 podcast of the same name by journalist Joe Nocera.

Paul Rudd plays Herschkopf and Will Ferrell plays Markowitz in a story that centers, as that kippah suggests, on a distinct slice of New York City’s religious and philanthropic Jewish community starting in the 1980s. The New York Jewish Week even plays a tangential role: Herschkopf wrote an occasional column for the newspaper for more than a decade.

The real-life Herschkopf took Markowitz on as a patient in 1981. Over the next three decades, according to the podcast and the series, the psychiatrist essentially transforms his patient into his manservant. He persuades Markowitz to cut off relations with his family and friends. He commandeers Markowitz’s Hamptons house and passes himself off as the owner. He insinuates himself into Markowitz’s business and finances. In 2010, Markowitz realizes what has happened and ends his relationship with Herschkopf, who lost his psychiatric license this year. Since that time, other patients of Hershkopf have made similar, if less chronic, allegations against him.

“The Shrink Next Door” touches on universal themes, like the fraught nature of mental health treatment, the occasionally fine line between friendship and manipulation, and the question of who in your life you can really trust. But the podcast and series also play out in a very specific setting: New York City’s affluent Modern Orthodox Jewish community.

Pages could be filled by just listing the Jewish references and resonances in the story. Herschkopf and Markowitz were introduced by Rabbi Shlomo Riskin, a pioneering liberal Orthodox leader who built a huge following at Manhattan’s Lincoln Square Synagogue before moving to Israel. Markowitz worked in the historically Jewish garment district. Herschkopf’s parents both survived Auschwitz. A breaking point in the story comes when Markowitz holds a second bar mitzvah. And so on.

But in interviews this week, Markowitz and Nocera both told The Jewish Week in separate interviews that they don’t especially see this as a story about the Jewish community. Nor do either of them think the rabbis who knew both men, and went to parties at the Hamptons house, bear any responsibility for what happened.

Markowitz said Herschkopf grew close to high-profile rabbis for the same reason he constantly tried to snag photos with actors: He was fixated on celebrity. Rabbis were also a convenient source of referrals.

“His modus operandi was to cultivate relationships with the New York City rabbinate — not just Manhattan, but Brooklyn, and wherever, Queens, what have you — and they would funnel patients to him,” said Markowitz, now 79. “He was a brown-noser, he loved the rabbis.”
Markowitz added, regarding the rabbis, “He betrayed these people. This is a massive betrayal. They trusted him. They sent him patients, they trusted him to do the right thing and help people, and what does he do? He hurt people.”

In the 1980s, Herschkopf instructed Markowitz to set up a philanthropic foundation called the Yaron Foundation, funded mostly with Markowitz’s money but with Herschkopf serving as president. Yaron’s tax documents give a sense of how Herschkopf used his patient’s money to curry favor with prominent Orthodox institutions in the area.

Yaron’s 2003 documents, for example, list donations of $1,000 or more to Riskin’s Lincoln Square Synagogue as well as Park East Synagogue, The Ramaz School, The Hampton Synagogue and the Foundation for Ethnic Understanding, which is run by Rabbi Marc Schneier. Lincoln Square, Park East, the Hampton Synagogue and Ramaz all got at least $1,800 from the foundation in 2006 as well. All of the institutions were led by influential Modern Orthodox rabbis.
Some rabbis who had relationships with Herschkopf have stayed silent on his misconduct in the years since the podcast came out. Riskin told JTA in 2019 that he “cannot offer any recollections, reflections or insights on the matter.” Rabbi Haskel Lookstein, founder of Ramaz, and Schneier, who also leads The Hampton Synagogue, did not respond to requests for comment this week.

Rabbi Joseph Telushkin, an author on Jewish ethics and values who has cited Herschkopf in his books as an authority, told JTA by phone this week that Herschkopf is “my friend” and that he had no comment on the allegations.

But Nocera, a former reporter and business columnist for The New York Times, said the rabbis were in the dark about their friend’s deeds.
“Most of them didn’t know of Ike as somebody who manipulates patients,” Nocera said. “He kept that sealed off. Unless you were part of his patients’ inner circle, you didn’t know that Ike was doing this stuff. If they asked him about the house, he would say, ‘We bought it for the company.’”

One Jewish venue that gave Herschkopf a platform was the New York Jewish Week. In light of his misconduct, some of his columns take on the ring of irony, like one in which he insists on the necessity of parents separating themselves from their married children so that the young couple can create a new home. Herschkopf allegedly advised patients to break ties with their families, and some became estranged from relatives on his counsel. At the same time, he resisted Markowitz’s attempts to break ties with him.

Other passages, written after Markowitz ended their relationship in 2010, sound almost like soul searching. In one, published in 2013, Herschkopf describes the pitfalls of psychiatry. He wrote, “When we consider ourselves the best, when we lose our humility, is precisely when, whether as physicians or as parents, we become most vulnerable to truly cataclysmic mistakes.”

Gary Rosenblatt, who was the publisher and editor of The Jewish Week when Herschkopf wrote his columns, said he had no knowledge of Herschkopf’s misconduct at the time, and had no further comment.

Nocera said that, in a sense, Herschkopf was able to take advantage of the New York Jewish communal network to draw people in much like Bernie Madoff, the notorious financial fraudster whose Ponzi scheme cost Jewish organizations and individuals billions of dollars. Nocera added, however, that given the magnitude and reach of Madoff’s crimes, there’s no equating the two men.

“As the story broadened, and I learned more, I definitely started to see it as a kind of — what did they call what Madoff did? — an affinity crime,” Nocera said. “I found a lot of people who were victimized by Ike in one way or the other and they were all Jews. Many of them were the children of Holocaust survivors, because he was.”

Asked to elaborate on the Madoff comparison, Nocera said, “Madoff operated on such a bigger scale than Ike. You know, Ike manipulated people partly just because he could. Most of them, there wasn’t money involved.”

Nocera did worry that, as a non-Jewish journalist exposing scandal among Jews, he would be accused of antisemitism. But, he said, “the only person who ever made that accusation, ever, was Ike.”

Herschkopf did not reply to a call for comment. In 2019, he told the Jewish Telegraphic Agency, “90% of the podcast is untrue or out of context,” a claim Nocera vigorously denies.

The “Shrink” series leans into the story’s Jewish milieu. In the first episode, rabbis get multiple mentions (though names are changed) and Herschkopf talks about his parents surviving the Holocaust. The second episode opens with a flashback scene from Markowitz’s bar mitzvah.
The emphasis on Judaism comes despite the fact that two of the three stars aren’t Jewish: Ferrell and Kathryn Hahn, who plays Markowitz’s sister. (Rudd is a Jew.) Hahn has played a string of Jews on screen, including a rabbi, and convincingly portrays a straight-talking Jewish single mother — sometimes sounding almost like Susie Essman on “Curb Your Enthusiasm.”

Ferrell, whose New York accent waxes and wanes, isn’t as consistent. But Markowitz is pleased with the actor’s performance. Later in the series, Markowitz says, Ferrell acquits himself well when saying the blessings before the Torah at synagogue. He just wishes the script had allowed Ferrell to avoid saying God’s Hebrew name.

Markowitz says the idea that only Jews should play Jewish characters is “narishkeit,” Yiddish for nonsense. Nocera agrees.
“I think that’s silly,” Nocera said. “Catholic actors should play Catholics? I mean, come on, I think that’s silly. And by the way, I have to say I thought Kathryn Hahn’s Hebrew was pretty darn good in ‘The Shrink Next Door.’”

And how is Markowitz handling watching his trauma reenacted on TV — two years after it topped the podcast charts? He says he doesn’t mind. Herschkopf controlled his life for 30 years. Now, he says, he’s moved on.

“This thing ended 11 years ago,” he said. “I’m over this guy. I don’t walk around carrying something on my shoulders, telling me, watch out for this, watch out for that. He doesn’t dominate my life.”

He added, “I’ll never see a psychiatrist again. I don’t need one. I told you, I’m a happy guy.”