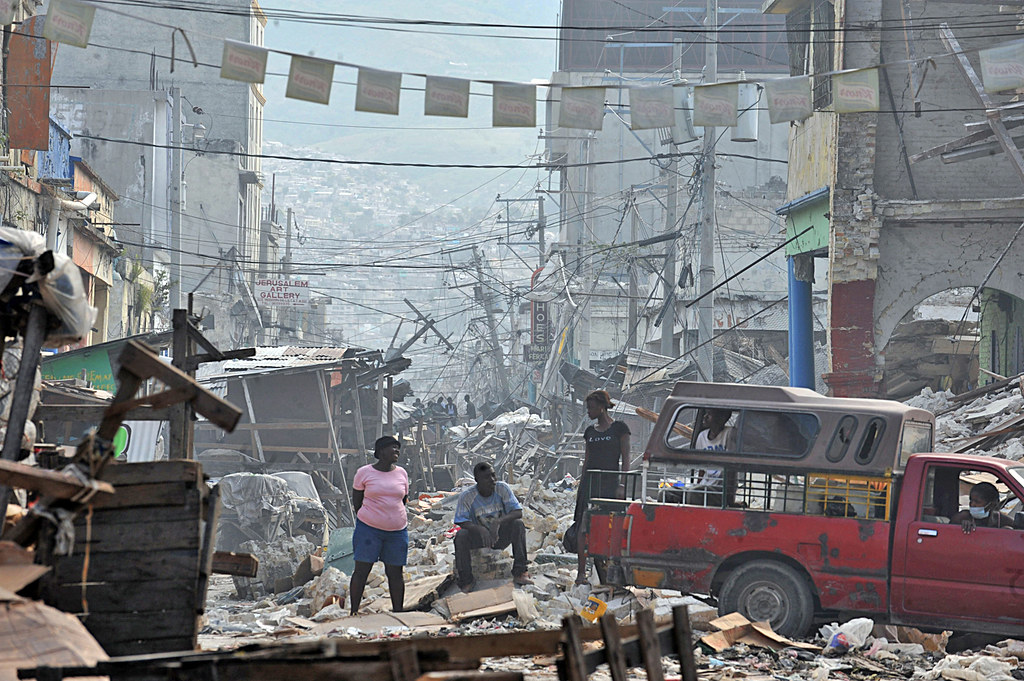 Editor’s Note: Jewish Federation of Greater Charlotte is one of 146 independent Federations that are associated with JFNA and is grateful to its local donors who contributed to this effort.

When a massive earthquake struck Haiti, the poorest country in the Western Hemisphere, on August 11th, Jewish Federations, working through the Joint Distribution Committee (JDC), mounted an immediate, large-scale humanitarian effort to save lives, heal the injured, and rebuild homes.
Haiti, which is no stranger to disaster, was already well-acquainted with the power of Jewish relief, according to former Haitian prime minister Michèle Duvivier Pierre-Louis.

Speaking on a JFNA-sponsored Webinar entitled “Crisis Relief in Haiti: Response to the Emergency” on August 24th, Pierre-Louis recalled that Israel set up the “best-equipped” field hospital after the 2010 earthquake to help the victims of that disaster, which killed more than 200,000 people and injured hundreds of thousands more. She said that there are “extremely positive echoes of the interventions of the Jewish community” and that she “welcomes opportunities to collaborate with them.”

The scale of the devastation in Haiti is staggering—more than 2000 dead, 12,000 injured, 300 missing, 800 displaced from their homes, and 130,000 houses damaged or destroyed. Nor has the country recovered fully from other natural disasters, such as Hurricane Matthew in 2016 and the 2010 earthquake.
The former prime minister emphasized the ongoing vulnerability of the Haitian people, many of whom are subsistence farmers descended of those who fought for freedom from slavery on the coffee plantations.

“How long will it take,” Pierre-Louis asked, “for populations that have been marginalized,” and who have endured a series of disasters, both man-made and natural, “to be counted as full-fledged citizens deserving to live in decent conditions according to their chosen way of life?”

The long-standing ties between the Jewish and Haitian peoples dates back to when Haiti was one of the few nations in the world to accept Jewish refugees fleeing Nazi Germany in the late 1930s, JFNA board chair Mark Wilf noted at the event. In 1947, Haiti was one of just three countries (along with Liberia and the Philippines) to change its vote and support the U.N. Partition Plan of Palestine, which paved the way for the establishment of the State of Israel.
Wilf announced that Federations across the continent had already launched drives to help the Haitians. In addition, Israeli aid organizations have sent experts to restore the flow of clean water and energy, and to provide critical psychological counseling.

Ariel Zwang, CEO of the JDC, said that while their mission, for more than a century, has been to help Jews in need throughout the world, the organization has “learned profound lessons about how to assist in times of great turmoil and great disarray.” Now, still operating from a Jewish platform, the JDC uses this knowledge to respond to people of all backgrounds who have suffered from natural disasters and other crises.

Working with dozens of Jewish and non-Jewish humanitarian organizations worldwide, enables JDC to conduct a coordinated Jewish response, streamlining the process of creating supply chains for aid, organizing volunteers to staff medical clinics, rebuilding schools, and providing resources in both the short and long-term to rebuild.

Avital Sandler-Loeff, the executive director of JDC-Grid, which leads disaster relief efforts, said she takes inspiration from a Hebrew phrase that translates loosely as, “Whatever I have to cope with makes me stronger.”

Pierre-Louis suggested that Haitian-Americans, many of whom have prospered, can play a larger role in contributing to the revival of the Haitian economy, a sentiment echoed by the American political leaders, activists, and that joined the webinar addressing both the magnitude of the crisis and the Jewish community’s response.

Congressman Carlos Giménez, from Florida’s 26th congressional district, which has a large Haitian community, reaffirmed his support for the U.S.-Israel relationship, and said that we must also stand by Haiti at this time of crisis. Adriano Espaillat, from New York’s 13th congressional district, pledged the support of the Latino-Jewish Congressional Caucus and praised the JDC and the Hispanic Federation, saying that they “have the know-how and tools to bring help to the Haitian people.”

JFNA CEO Eric Fingerhut called on the Jewish community to increase its own efforts in helping the Haitian people to recover. Citing the laws of Sukkot from the Talmud, which are being studied at this time of year as part of the Daf Yomi, the daily learning from Jewish tradition, he noted that acts of charity are deemed more important than all other types of offerings and sacrifices.

Fingerhut also alluded to the High Holy Days, in which Jews pray that the presence of God remains among us throughout the rest of the year.
“During this period of renewal and uplift,” Fingerhut said, “we must continue to stay focused on helping the needy as a critical aspect of our organized communal work.”