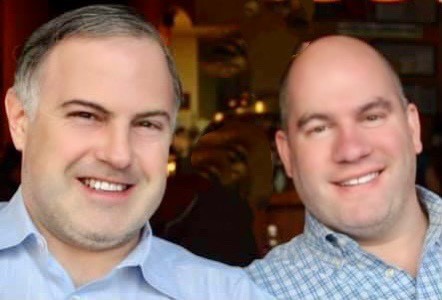 Jewish Family Services (JFS) is thrilled to announce the first-ever honorees for Live, Laugh, Give 2022. “This year we have the esteemed pleasure of recognizing Kevin Levine and Louis Sinkoe for their many contributions to JFS, the Jewish community, and the Greater Charlotte community,” said Howard Olshansky, JFS executive director.

Kevin and Louis, both Charlotte natives, demonstrate their strong belief in giving back and leaving the world and community a better place through their many actions and financial support in the Jewish community. Levine and Sinkoe have served our community through leadership roles with Temple Israel, The Foundation for the Charlotte Jewish Community, The Foundation of Shalom Park, the Hebrew Cemetery Association, the Jewish Federation, and Jewish Family Services. Sinkoe stated, “In my role as president of Jewish Family Services, I have directly seen the impact JFS’s services have on meeting the needs of our community. Kevin and I are flattered to be the first honorees of Live, Laugh, Give and look forward to inspiring others to help support JFS and the event.”

The event will feature comedian and actor Elon Gold, who has starred in FOX’s “Stacked” and NBC’s “In-Laws.” His one -hour stand-up special on Netflix, “Elon Gold: Chosen & Taken,” received wide acclaim from audiences and peers alike. It is currently streaming on Amazon Prime. He has made 10 appearances on “The Tonight Show” and had a recurring role on the FOX hit show “Bones.” Elon was a writer/performer on ABC’s “The Dana Carvey Show” and has guest starred on “Frasier,” “The Mentalist,” and “Chappelle’s Show,” among others. He recently had stellar appearances on “The Late Late Show With James Corden” and Comedy Central’s “This Week at the Comedy Cellar.” His routines have gone viral and are shared by millions around the globe. He is also currently featured in the Hulu movie “The Binge,” and in season three of HBO’s “Crashing,” he plays his most challenging role yet … himself. Elon can next be seen opposite Larry David in a recurring role on the upcoming 11th season of “Curb Your Enthusiasm.”

Live, Laugh, Give comedy night brings together supporters, donors, volunteers, and community members for “a night of laughter, a lifetime of healing.” It’s no coincidence that JFS chose a comedy night event to raise funds for the organization five years ago. Study after study has proven that laughter has many physical and mental health benefits. According to MayoClinic.org, short-term benefits of laughter can include stimulating many organs, activating and relieving your stress response, and soothing tension. Long term, laughter may improve your immune system, relieve pain, increase personal satisfaction, and improve your mood. “At the time, we were looking to develop an event that would bring people together in a fun, entertaining atmosphere,” said Susan Meyer, development manager and co-creator of Live, Laugh, Give.

All proceeds benefit JFS’s programs and services to enhance the quality of life for individuals and families in our community, including therapy, parenting support, financial and food assistance, domestic violence resources, senior engagement, case management, Holocaust survivor and family support services, and aging support, including home visits, housing transitions, and caregiver support groups. With expertise, compassion, and an emphasis on maintaining dignity, JFS staff are dedicated to working with clients to develop individualized plans. By uplifting, strengthening, and empowering individuals and families, JFS helps those in need when they need it the most.