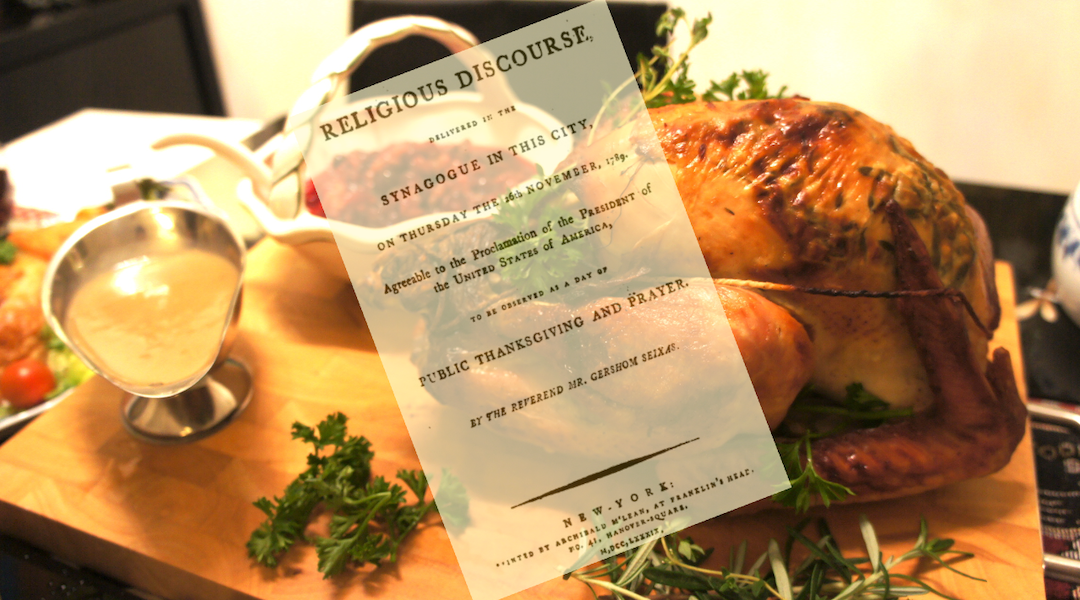 (JTA) — Thanksgiving seems to have all the right ingredients for a holiday that most American Jews can embrace: It doesn’t fall on Shabbat, its roots and message are nonsectarian, and its only real ritual is a multi-course meal.

That’s why prominent Orthodox rabbis of the mid-20th century, including Rabbi Joseph Soloveitchik and Rabbi Moshe Feinstein, gave Thanksgiving their hechsher (seal of approval). Shari Rabin, associate professor of Jewish studies and religion at Oberlin, told me that American Jews are comfortable with Thanksgiving for the most part because “it’s not as directly connected to Paganism or Christianity as Halloween or Christmas.”

And yet like so many aspects of the American-Jewish experience, Jews didn’t accept Thanksgiving — and Thanksgiving didn’t accept the Jews — without some struggle. As a 19th-century skirmish between Jewish leaders in Pennsylvania and their state’s governor demonstrated, Jews made sure that Thanksgiving was a day they could celebrate on equal standing with Christians.

Well before President Abraham Lincoln declared Thanksgiving a federal holiday in 1863, there were national and local “proclamations” that officially established a day of gratitude each year. In the first year of his presidency, on Oct. 3, 1789, George Washington issued a Thanksgiving proclamation by the new government, designating “Thursday the 26th day of November next” as Thanksgiving.

The proclamation calls for “a day of public thanksgiving and prayer to be observed by acknowledging with grateful hearts the many signal favors of Almighty God” — religious, but not specifically Christian. Gershom Mendes Seixas, the cantor of New York’s Congregation Shearith Israel, welcomed the president’s declaration in what is regarded as the first Jewish sermon about Thanksgiving.

Washington goes on to urge gratitude “for the civil and religious liberty with which we are blessed” — a message consistent with his letter, one year later, to Seixas’s brother Moses, of Touro Synagogue in Newport, Rhode Island, promising “liberty of conscience” to all people, regardless of religious belief.
Other Thanksgiving  proclamations did not communicate Washington’s nonsectarian message. Many were, in fact, filled with Christian language.
According to Laura Yares, assistant professor of Religious Studies at Michigan State University, when the United States was in its nascent stages, “there was no blueprint for creating a non-sectarian public holiday.” Yares told me that “in the long evolution of customs and language for celebrating Thanksgiving, we shouldn’t be surprised to find that there have been public figures who have used the cultural resources of their own traditions to describe Thanksgiving, including Christian theology.”

And it was that kind of theology that set off a number of Jewish Philadelphians in what can only be described as a 19th-century version of a Twitter war.
In 1848, Gov. William Johnston of Pennsylvania issued a Thanksgiving proclamation calling for the day to “be set apart, by all denominations of Christians within this Commonwealth.”

That did not sit well with some Jews, and they made their displeasure known in the pages of The Occident and American Jewish Advocate, a Jewish newspaper published in Philadelphia.

The November issue of the paper quoted A.T. Jones, a Jewish Philadelphian, who complained to the governor that “Israelites never forget to pray for their rulers — yet your excellency seems to have no recollection of their existence… treat[ing] them as though they were not worthy of it.” Jones lamented that Jews “fought and bled” with their fellow American citizens and expressed great disappointment in a proclamation that clearly omitted Jews in the celebration of Thanksgiving.

The North American and United States Gazette, a secular Philadelphian newspaper, noted that a similar dustup had occurred a few years earlier over a proclamation by then Gov. Francis Rawn Shunk. In a forgiving tone, the Gazette suggested that such proclamations “are seldom written by governors themselves.”

The most powerful exchange, published in the same paper, was between a prominent Jewish lawyer in Philadelphia, Joseph Moss, and the governor himself, a few weeks prior to the holiday. Learning that Gov. Johnston was in town, Moss immediately wrote, complaining that in a commonwealth with over 15,000 Jews, the proclamation “seems entirely to have lost sight of these undeviating followers of the Holy Bible.”

The governor responded the following day with an epic apology: “I cannot permit you to suppose that the spirit of intolerance has a place within my bosom,” he wrote. “The terms of [the proclamation’s] composition or its phraseology were not designated by me. It was issued by the Secretary of State during my absence, and I presumed [it] would be in the usual form.”

The governor concluded his response by officially inviting the Jewish community to observe Thanksgiving and signed it, “Truly your friend, Wm. F. Johnston.”
This crisis-averting resolution — and the new “friendship” it supposedly created — sounds almost quaint after 170 years. But these Thanksgiving proclamation mishaps, which occurred throughout the 1800s in various states — including Ohio, Pennsylvania and South Carolina — turned into opportunities for Jews to assert and insert themselves into the national narrative.

Yares notes: “Since Moses Seixas’ letter to George Washington in 1790, Jews have openly and publicly taken on the task of holding political leaders to the task of preserving America’s commitment to the separation of church and state.”

Thanksgiving this year arrives on the Thursday before Hanukkah,  and we’ll be thinking about our dual loyalties to turkey and latkes. Hanukkah celebrates the right of Jews to worship without being coerced into the ways of the majority. Thanksgiving celebrates the ways people of all faiths — and none — can express thanks on equal terms.

To paraphrase the late 19-century Jewish philosopher Ahad Ha’am’s maxim about Shabbat: More than the Jewish people have kept Thanksgiving, Thanksgiving has kept the Jews — and enabled them to consistently affirm their rightful place in these United States.

The views and opinions expressed in this article are those of the author and do not necessarily reflect the views of JTA or its parent company, 70 Faces Media.