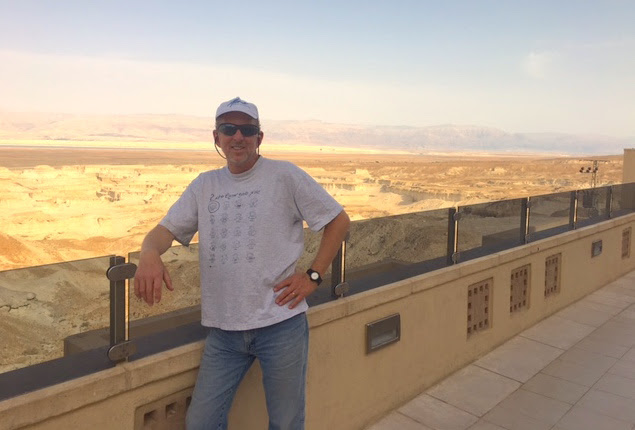 Remembering Rabbi Steven Sager, a “Leader, Mentor, Poet’ in North Carolina and Beyond

(JTA)  May 19, 2022 — When his local Jewish magazine asked Rabbi Nick Renner earlier this year to explain how he decided to become a rabbi, he immediately attributed the decision to his hometown rabbi, Steven Sager.

Sager had gone to bat for him during his parents’ bitter custody dispute, then had nurtured his nascent love of Torah by quoting ancient texts and “Star Wars” scripts alike. Renner ultimately enrolled at Reconstructionist Rabbinical College because Sager had studied there. “He helped me figure out who I was and who I wanted to be,” Renner wrote.

So when Sager died Sunday at 71, after an extended battle with pancreatic cancer, Renner got in his car and drove south from his home in Wilmington, Delaware. He would read a poem by Yehuda Amichai, the Israeli poet beloved by Sager, at his rabbi’s funeral.
“He was a father figure to me at a time when I didn’t have one,” Renner said Monday from somewhere along I-95, en route to Durham, North Carolina, where Sager led the Conservative Beth-El Synagogue for 32 years.

I called Renner — Nick — because I went to Hebrew school with him. Rabbi Sager was my childhood rabbi, too, and I was puzzling over my role in marking his death.

Of course I felt deep personal sadness. Rabbi Sager married my parents, in one of his first weddings after coming to Beth El. Thirty-one years later, he was one of two rabbis to join me and my husband under our chuppah, too. Along the way, he was my first model of a congregational rabbi and, through his unusual practice of engaging in a public conversation with each new bar and bat mitzvah, he provided an early example of what it looks like to take children seriously. As a rabbi’s wife and a mother, I draw upon those lessons all the time, in ways large and small.

But I wasn’t just thinking about myself. I edit a global news organization that regularly publishes obituaries. Was Rabbi Sager a story?

By any traditional definition, maybe not. Born in 1951 in Maryland, Sager was active in Jewish youth groups and attended the University of Maryland and RRC before taking his post at Beth El in 1978. There he worked for more than three decades, teaching countless classes, giving countless sermons, pressing countless copies of the book “Voices of Wisdom” into the hands of countless 13-year-olds — always telling stories, but never making himself one.

But one thing a Reconstructionist rabbi at a Conservative synagogue will reliably teach is that traditions can evolve. And in the last two years, the Jewish Telegraphic Agency has tried out new approaches to obituaries, in keeping with the ethos that Jewish journalism only matters when it’s in conversation with the full range of experiences in the communities we cover. We experimented with one-line obituaries to capture the magnitude of pandemic losses; with heart-felt remembrances of quirky personalities; and with collections of stories about rank-and-file Jews whose deaths mattered deeply to the people close to them.
I asked Renner what role he thinks obituaries play for Jews in a world where local newspapers are in decline and new approaches to mourning, including Zoom shivas and social media tributes, are on the rise.

“Oh, it is everything,” he told me. “What we do in hesped, Jewish eulogy, is tell someone’s story, it’s at the core of why we say zichrono livracha, may their memory be a blessing. … An obituary is a delivery mechanism for making one’s memory into a blessing.”

He added, “You didn’t ask this, but I’ll answer it: Why highlight some backwater rabbi in a national publication? There’s a richness and a beauty to Jewish life that we don’t always see in the discourse. … For Jews who live in these communities, [an obituary] is the fabric of their life well lived, and on some level a commentary on the meaning of what it means to be Jewish.”
And so what is the story JTA should tell about Rabbi Steven Sager?

“He wasn’t one of those rabbis who was a quasi-celebrity figure. That wasn’t Steve and that wasn’t something that he chased down,” Renner said. “He was an excellent rabbi who made a difference to a lot of people.”

Sager made a difference to people like Ashley Klapper Pressman, who also grew up at Beth El and now works as the executive director of Jewish Volunteer Connection in Baltimore.

To people like Shula Bernard, who spoke at the funeral about how Sager empowered her to lead her congregation in prayer after growing up in an Orthodox community where that was not the norm, and Anna Carson DeWitt, a photographer who grew up at Beth El and not too long ago captured a picture of Bernard and Sager, among others, during the havdalah ritual that ends Neilah, the last service of Yom Kippur, when the window to make pleas to God closes for the year.

“How powerful it was to grow up with a rabbi who was so open to being led by others, particularly by women,” Carson DeWitt told me.

To rabbis all over the world who learned with and from Rabbi Sager, whether informally; through his long-term relationship with the Shalom Hartman Institute in Jerusalem; or with Sicha, a mentoring and education initiative he launched in his retirement,
“Steve was my mentor during my days in the Triangle both intellectually and professionally,” said Rabbi Jon Perlman, who led a congregation in nearby Raleigh in the 1990s and now works in Pittsburgh. “Steve was a creative genius and was always raising new readings of poetry and midrash. Steve was the first to teach me how to build community through ritual. His teaching powerfully influenced my approach to my rabbinate.”

To Congregation Rodfei Zedek in Chicago, where I was surprised to discover when I first visited after meeting my husband, who grew up there, that Rabbi Sager was a recurring character through Ed and Stacey Hamburg, his best friends since their teen days as United Synagogue Youth leaders.

“I always knew that only when one of us died would our friendship end, but I never imagined it would happen this way,” Ed Hamburg said at Sager’s funeral Tuesday, which I watched alongside hundreds of people in the Beth El diaspora by Zoom. “I always thought that Steve would optimize his remarkable abilities as a rabbi, teacher, poet and scholar to deliver his usual and customary most fabulous eulogy at my funeral. Instead, I’m here speaking to you at his, figuring out how to accept the fact that he will no longer be an active participant in my life.”

To new friends including Eliana Light, a Jewish musician who moved to Durham during the pandemic and found that learning with Rabbi Sager was a highlight of her new home.

“No matter where I travel, there is someone who will respond to ‘I live in Durham, North Carolina’ with ‘Oh, Rabbi Steve Sager!’, a big smile, a deep sigh and a story about how much he meant as a mentor, teacher, colleague or friend,” Light told me.
“Rabbi Sager was deeply in love with Jewish text, with Jewish language, with the Jewish people, and invited those around him to fall in love too,” added Light, who spoke with Sager about liturgy in two episodes of her podcast that she reissued after his death. “More than any one text or piece of wisdom, it was his presence that will stay with me most, his sacred gift of being truly present in the moment with whoever he was with. I was honored to share even a few of those moments with him.”

To Rivka Miriam, the Israeli poet, who was bound to Rabbi Sager by his passion for the Hebrew language, poetry and his beloved Jerusalem, where, he would often say, the prophet Elijah can be found in unexpected places. An effort is afoot to preserve Sager’s pioneering translation work in a book.

“Steve was a beautiful and deep human being,” Miriam wrote. “I generally do not believe in translation, especially translation of poetry. It seems to me that every language has an inner secret that cannot be transposed into another vessel. Yet, when Steve translated my poems I had a different feeling — I felt he entered an inner layer, one that lies beneath any language, a layer carrying a hidden code. My poems are very Hebrew, yet that very Hebrew stayed in Steve’s translations. He came to them from within them with love, sensitivity and courage. I bitterly mourn his passing.”

To Rabbi Daniel Greyber, Beth El’s current rabbi, whose close relationship with his predecessor was unusual in a field where transitions can be tense. During the funeral, Greyber consoled Rabbi Sager’s family — Sabina, his wife of five decades; his children Ariele, Jacob and Noah; their spouses and children — and described his astonishment at how Sager experienced his illness as an opportunity for revelation and awe and to experience what Sager called “a conspiracy of chesed,” or kindness.
After losing a close friend as a young adult, Greyber wrote a book about his journey through grief. When I spoke to him on Wednesday, he was thinking about what this next stage of that journey, without Beth El’s emeritus rabbi at his side, will sound like.
“In a very lonely profession he was the harmony in my ears,” Greyber said about Rabbi Sager. “When I started out my eulogy by singing ‘Naar Hayiti,’ I heard his harmonies over and under mine. I love singing in harmony. … Where’s that going to come from now? I don’t want to spend the next 20 years of my rabbinate not harmonizing.”

To the clergy and parishioners of Trinity Avenue Presbyterian Church, where Sager forged a special bond; to the Muslim scholar of interfaith relations Abdullah Antelpi, who told me, “I often felt the presence of God in his presence”; and to his students at Duke Divinity School, who will carry Sager’s inspiration in their work as Christian leaders.

“The rabbi’s course was integral in expanding our imagination,” Bri Higa, a Duke student who took two classes with Sager over the last year. “He had such a gift with words: He could take you all the way out into the aether and then bring you back, and you felt like you had a souvenir from the outer universe. A lot of mystics can go there, but he could take you there, and give you the skills to take yourself there.”

To people like my parents, who met at the reception welcoming Rabbi Sager to Beth El; on Tuesday, my father was one of the final members of the chevra kadisha, the burial society, to sit with Sager’s body in the hours before he was buried. And to my husband, in whose voice from the pulpit someone familiar with Sager’s could easily hear echoes.

To the congregants of Beth El, past, present and future, who will forever raise their hands during the Torah service because Rabbi Sager embraced questions, even when the answers might remain out of reach.
And to so many more.
“He was a rabbi, teacher, scholar, student, leader, mentor, poet, writer, linguist, counselor, confidant, and colleague; an athlete, musician, singer, and storyteller,” said an obituary written by Sager’s family and distributed by Beth El in the hours after his death. “He was a son, husband, father, grandfather, brother, and uncle, and his friendships were beyond count.”

May the memory of Rabbi Steve Sager be a blessing. And may we find a way to honor the memories of all of who shape the contemporary Jewish experience, each in their own way.