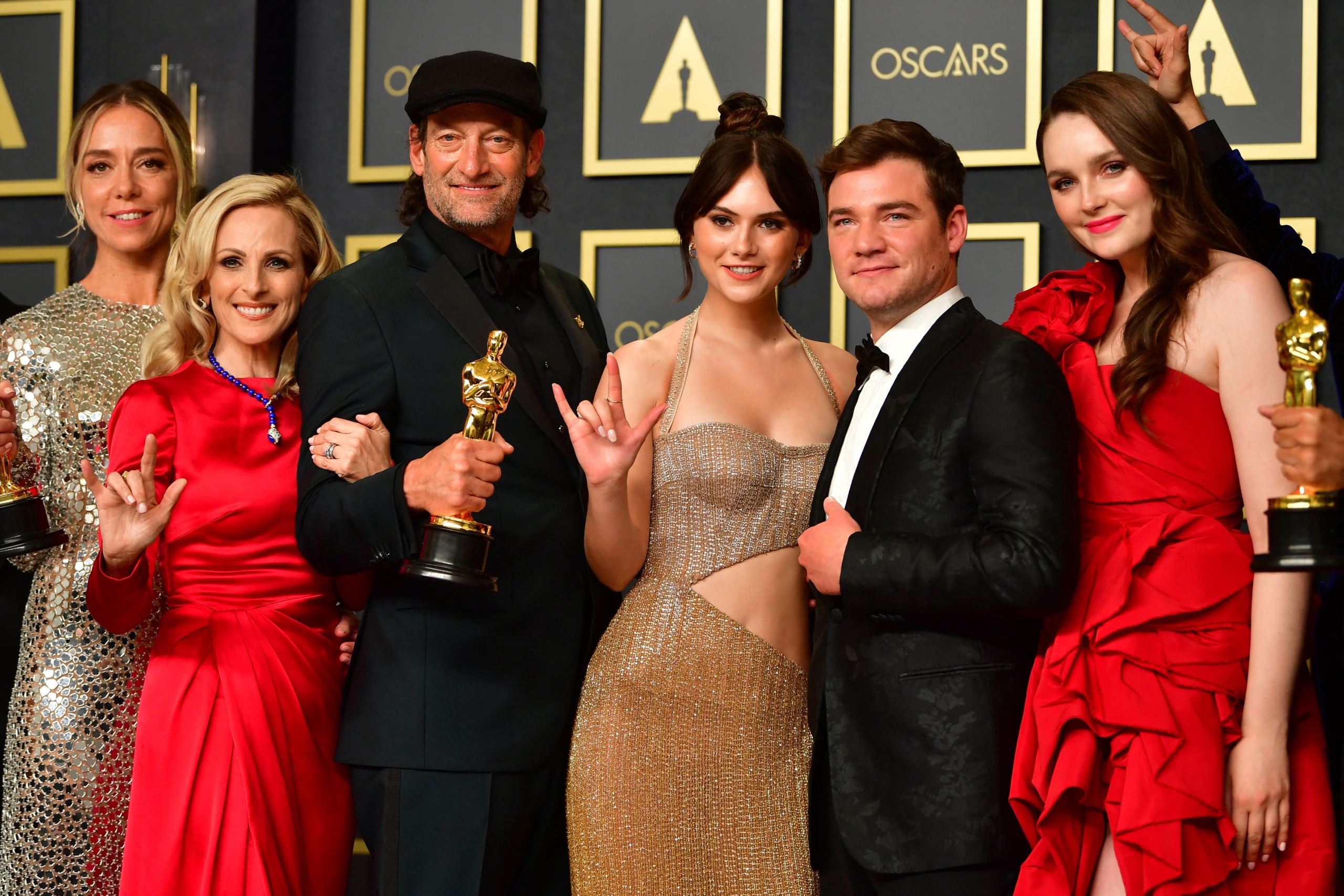 Oscars 2022: The Most Memorable Jewish Moments

(JTA) — The Oscars went on as usual Sunday night — although you wouldn’t know it from the morning-after conversation. A violent altercation between celebrities became the most-discussed moment of the evening (more on that below), and general reviews for the show itself were dismal, full of criticism for its slapdash presentation and pre-taping of several awards categories.
But there were a few Jewish moments to be had in the three-and-a-half-hour evening.

Here were the highlights:

‘CODA’ nets a historic Best Picture win, and Marlee Matlin kvells
“CODA,” an emotional drama about a deaf family and their hearing child who dreams of becoming a singer, picked up three Oscars, including Best Picture. Among the representatives of the film who came onstage to accept the award was Marlee Matlin, the Jewish actress who co-stars as the family matriarch. In 1987, Matlin became the first-ever deaf performer to win an Oscar, for “Children of a Lesser God” – a moment that got a shout-out during the producers’ acceptance speech, as Matlin stood next to co-star Troy Kotsur, who became the second-ever deaf actor to win an Oscar earlier in the night.

Hans Zimmer tucks his Oscar into his bathrobe
Megastar film composer Hans Zimmer, a German Jew whose mother had fled the country in 1939, won his second Oscar for his original score for the sci-fi epic “Dune.” (The award, like several other craft and technical awards that night, was presented during a pre-taped show and then edited into the live broadcast, in a move derided by many in the film industry as disrespectful.) Zimmer was in Amsterdam at the time; “Dune” co-star Jason Momoa accepted on his behalf. Via Twitter, Zimmer showed off a photo of himself clad in a hotel bathrobe in Amsterdam, rocking what was either his new statuette sent on an incredibly fast express flight, an Oscar stand-in, or his 1994 trophy for scoring “The Lion King.” “Wow!!” he posted.

The kid stays in the picture
Robert Evans, the legendary Jewish producer and studio executive who was responsible for getting many classic movies off the ground (and whose volatile personal life included seven marriages, a conviction for cocaine trafficking and briefly becoming a party of interest in the “Cotton Club” murder), got a shout-out during a segment paying tribute to the 50th anniversary of “The Godfather.” Flanked by his stars Al Pacino (who starred in the film) and Robert De Niro (who did not, but did star in its sequel), writer-director Frances Ford Coppola had words of appreciation for Evans and his vision, without which, he said, “The Godfather” would never have been made. “The Offer,” an upcoming miniseries dramatizing the making of “The Godfather,” casts Matthew Goode as Evans, who died in 2019. Evans was born Robert Shapera to Jewish parents in New York City.

The comic relief
After going three years without a proper host, the Oscars went overboard and brought on three, including Jewish comedian Amy Schumer, who delivered jokes about motherhood and Leonardo DiCaprio’s young girlfriends. Schumer was the show’s first Jewish host since Billy Crystal’s last stint in the gig a decade ago. She was joined onstage by Regina Hall and Wanda Sykes, the latter of whom toured the new Academy museum in a taped bit — neglecting to mention the museum’s controversial initial exclusion of Jews from its permanent collection. However, the names of major Jewish donors like Barbra Streisand and Haim and Cheryl Saban were visible during the comedy segment.

A Jewish win, during a tense moment
Overall it was not a good night for Jewish nominees, as high-profile figures like Steven Spielberg, Andrew Garfield and Maggie Gyllenhaal came away empty-handed — as did “Licorice Pizza,” the Best Picture nominee centering on a Jewish Angelino in the 1970s played by Jewish rock star Alana Haim. However, Jewish producers David Dinerstein and Robert Fyvolent did score their first Oscar, for producing Best Documentary Feature winner “Summer of Soul (… Or, When The Revolution Could Not Be Televised).” Dinerstein and Fyvolent had obtained long-forgotten footage of the 1969 Harlem Cultural Festival originally shot by Jewish cameraman Hal Tulchin and recruited musician Ahmir “Questlove” Thompson to direct a documentary built around the footage. Questlove’s heartfelt acceptance speech for the film spoke to the importance of resurrecting the cultural significance of “Black Woodstock” for a new generation.

Unfortunately the “Summer of Soul” team’s win was overshadowed by what happened immediately before, when Best Actor winner Will Smith slapped presenter Chris Rock onstage after Rock told a joke about Smith’s wife, actress Jada Pinkett Smith. Afterwards, a flustered Rock read off the winner, crediting “Ahmir Thompson and four white guys” (although there were only three other named winners including Dinerstein and Fyvolent, and the third, Joseph Patel, is South Asian).
.