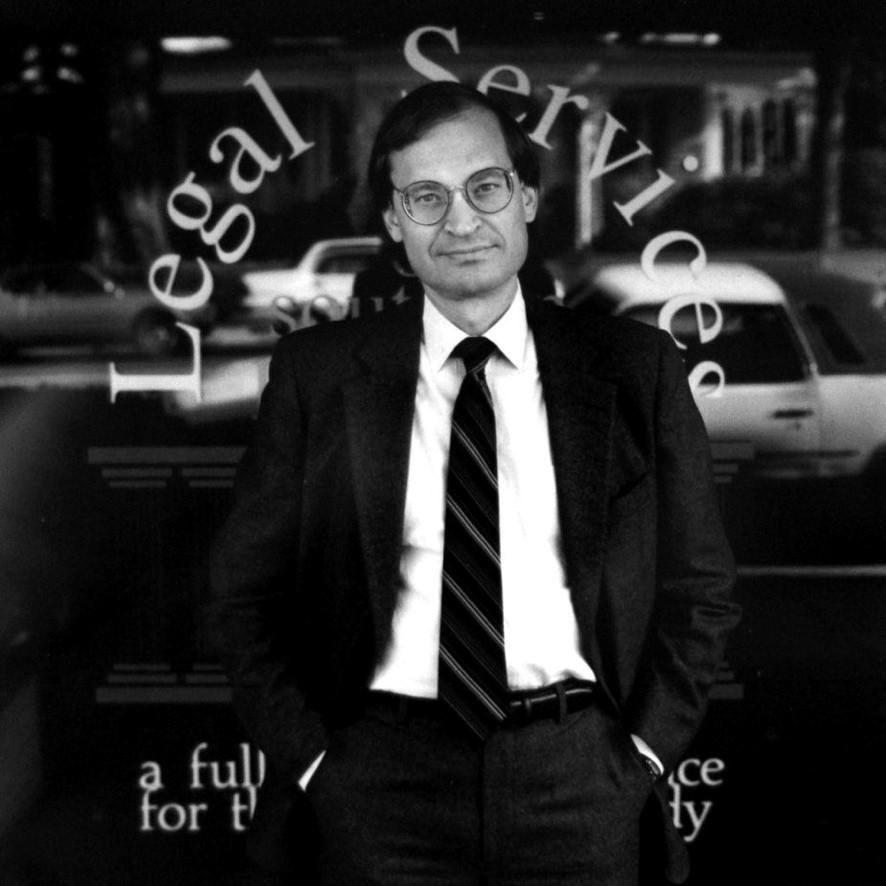 Kenneth Schorr Retires: A Lifelong Commitment to Legal Aid and the War Against Poverty

On April 26, North Carolina Supreme Court Justice Anita Earls presented the prestigious Order of the Long Leaf Pine Award to Kenneth Schorr at his Charlotte Center for Legal Advocacy (“The Advocacy Center”) retirement celebration for exemplary service to the state. This followed on the heels of the Lifetime Achievement Award from the North Carolina Justice Center in 2020, recognizing Schorr “for his decades of leadership in legal services, as he tirelessly defended the interests of underrepresented North Carolinians.”

After receiving his bachelor’s degree from Brandeis University, and his J.D. from the University of Michigan Law School, Schorr set out in the mid-1970s to see the country. What he viewed led him to become a poverty lawyer, mostly in the Deep South, advocating for the underprivileged his entire legal career. Schorr served as litigation director/acting executive director of Community Legal Services in Phoenix, Arizona, from 1979 to 1983, as executive director of Legal Services of North Texas in Dallas, Texas, from 1983 to 1987, and as executive director of The Advocacy Center, formerly known as Legal Services of Southern Piedmont (LSSP), from1988 until his retirement. He was previously in private practice in Little Rock, Arkansas, representing community organizations, labor unions, and individual employees in labor and civil rights cases.

To support the clients and community served by The Advocacy Center in the Charlotte area and west-central North Carolina, Schorr recruited and supported lawyers and other staff to be experts in their areas of legal practice: family support and health care, immigrant justice, consumer protection and employment law, public benefits, low-income tax clinic, elder law, veterans’ benefits, and housing.

Schorr reflects on this breadth of work undertaken by The Advocacy Center, saying, “Most nonprofits are organized around a problem, or a client group, but this notion that we do housing and health care and immigration and tax and all these different things for all these different groups of people and we do individual work and systemic advocacy — is kind of amazing in scope.”
Although clients might present one problem, Schorr explains his organization’s holistic approach: “Over the last three decades, the security of most American families has deteriorated, so one big setback, such as a serious illness that interrupts employment or the deportation of a wage-earning member of the family, causes things to fall apart in big pieces. So helping people put it back together requires looking more broadly at them.”

Noting that access to legal services “is only a part” of justice for all, Schorr steered his organization’s anti-poverty mission, “To change systems adversely affecting all low-income people. It is a part of how we will end poverty, and racism, for everyone in our community.” One example is the state of North Carolina’s refusal to expand Medicaid, leaving hundreds of thousands of people without health insurance.

In 2002, The Advocacy Center’s precursor LSSP split into two collaborative entities (Legal Aid of NC Charlotte and LSSP) in response to congressional funding cuts and restrictions placed on Legal Services Corporation-funded organizations. Although this reorganization allowed LSSP to continue to do systemic advocacy and represent disfavored groups, such as incarcerated individuals and immigrants who are not yet citizens, it left Schorr’s organization without funding from Legal Services Corporation.
Without a single core funding stream, Schorr’s organization has had to rely primarily on its annual Access to Justice campaign (supported generously by more than 1,000 members of the local bar) and cobbling together grants. Thus, in 2014, when Schorr’s retirement was on the not-too-distant horizon, he resolved to have a long-term sustainability plan in place. That plan yielded rebranding as Charlotte Center for Legal Advocacy, a donor and political support base that is broader than the licensed bar, a successful Building Justice capital campaign that has nearly reached its $6 million goal, and newly renovated office space at 5535 Albemarle Road.

Schorr, an active member of Temple Beth El, along with his wife, Dr. Jane Marcus, is deeply touched by the great support of many members of the Jewish community, especially capital campaign co-chair Alan Kronovet.

The roots of Schorr’s lifelong commitment to the war against poverty can be traced to his parents. His father, Alvin Schorr, who was dean of NYU’s School of Social Work, held important positions in several federal government agencies where he conducted analyses of poverty and how to best allocate government funds in the war against poverty. His mother,
Ann Girson Schorr, who didn’t arrive in the U.S. until she was 21, wrote, “Finding a Place in the World,” her memoir of growing up impoverished in Argentina as a Polish Jewish refugee, denied entrance into the U.S., which had shut its doors to Eastern European refugees.

For all his awards and legal achievements, Schorr is best known for his humility. His resume lists various jobs he held from 1968 to 1975, including portrait and news photographer, taxicab driver, summer camp counselor, vacuum cleaner sales, government clerk, and academic researcher and writer — the resume of a man who knows that there is dignity in all labor and that many hardworking people in need of legal assistance cannot afford private lawyers. They need an organization like The Advocacy Center, whose tagline is “Justice lives here.” They need a champion like Kenneth Schorr, who has been in their corner for decades.
To learn more about Charlotte Center for Legal Advocacy or to make a donation to honor Ken’s leadership and legacy, please charlottelegaladvocacy.org or checks can be mailed to Maria Byers at Charlotte Center for Legal Advocacy at P.O. Box 25558, Charlotte, NC 28229