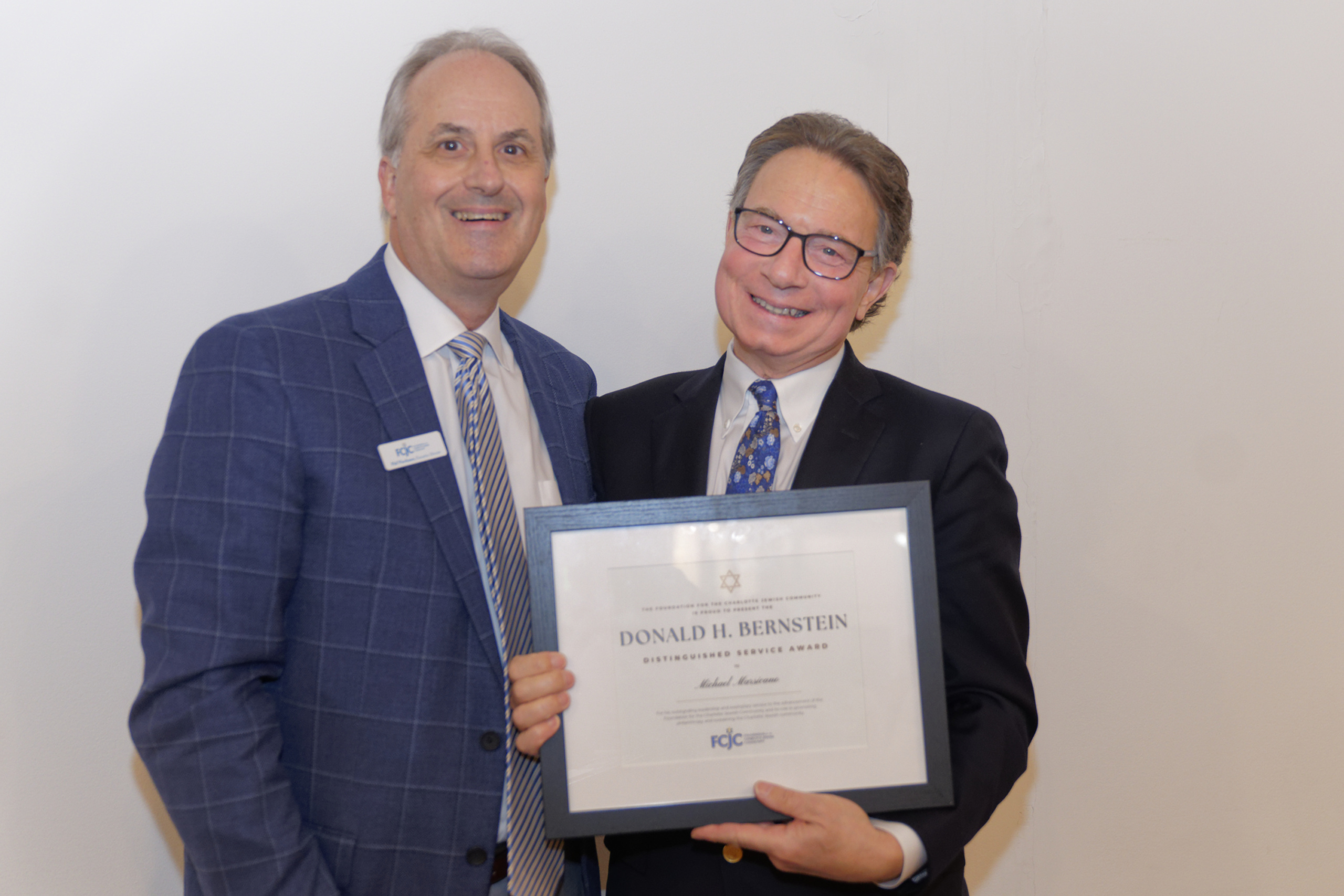 As part of its 25th anniversary celebration, the Foundation for the Charlotte Jewish Community (FCJC) has established the Donald H. Bernstein Distinguished Service Award to honor its first board chair, Don Bernstein, and has named Michael Marsicano, president and CEO of Foundation For The Carolinas (FFTC), as its first recipient. The award was announced at FCJC’s Community Legacy Celebration and Annual Meeting held on August 28, attended by community legacy donors, FCJC fund holders, and organizational leaders.

In establishing the award, FCJC recognized both Bernstein and Marsicano for their outstanding leadership and exemplary service to the advancement of FCJC and its role in promoting philanthropy and sustaining the Charlotte Jewish community. The award will be given on occasions to recognize significant and extraordinary contributions to the organization.

Announcing the establishment of the award, and accepting it on Mr. Bernstein’s behalf, was Phil Warshauer, FCJC executive director. “Don was humbled when I told him and Bobbi that the award has been established in his name to honor and thank him,” said Warshauer. “His first response was, ‘Why me?’ My response was, ‘Who else?’ I reminded him that he is our founder, our first board chair, and has always been our biggest advocate. It could be said that FCJC was Don’s dream and vision.”

“I am truly honored for the recognition of having my name associated with this award,” said Bernstein. “I am sorry that medical issues prevent me from being with you this evening. I am proud to have participated and witnessed FCJC’s growth and the influence it has had in our community.”

Michael Marsicano, who has served on the FCJC Board for the past 23 years, was recognized for his advocacy and support for FCJC and Charlotte’s Jewish community. “Michael’s contributions and support of FCJC have been boundless, often taking place below the radar,” remarked Warshauer. “Over the years, Michael has served as trusted counsel to me and other FCJC leaders, like Don, along with other donors and professionals who led our Jewish community.” Marsicano, who has served as president and CEO of Foundation For The Carolinas since 1999, will retire from the organization in January.

“It is an honor to me to have Michael named as the first recipient of the Donald H. Bernstein Distinguished Service Award,” said Bernstein. “Our relationship with Michael goes back to his days leading the Arts & Science Council. FCJC was in its infancy when we came to FFTC. His accomplishments at FFTC speak for themselves, but throughout the years, he has always been a staunch supporter of FCJC and has assisted us in growing to where we are today. I remember those early board meetings and the advice he offered to a young organization with big dreams. I look forward to having the opportunity to shake his hand in person to congratulate him on all his accomplishments and his new life in retirement.”

“I am honored and humbled to receive the Donald H. Bernstein Distinguished Service Award from the Foundation for the Charlotte Jewish Community,” said Marsicano. “Don is one of my heroes, and to have my name associated with his legacy is priceless to me. As someone who has worked closely with the FCJC board, Phil, and his whole team throughout my time at FFTC, I know the meaningful and lasting impact they have had on our community. I cannot thank them enough for this honor, which I will cherish.”